Optics in Biology and Medicine

Biophotonics is an exciting field that investigates fundamental principles and develops new optical technology for the interaction of light or photons with biological organisms, tissues, cells, and molecules.  Biophotonics as a field can be composed of three major areas of knowledge.

The first area of knowledge essentially includes the fundamentals of many interdisciplinary fields and how they uniquely are related.  Someone interested in Biophotonics should have a solid understanding of the physics of light, and the engineering of devices and instruments that are used to generate, modify, and manipulate light.  In addition, one must understand the fundamentals of biology and medicine, such as the molecular and cellular processes that occur in living systems, and how these contribute to the systems-level functioning or physiology of organisms, including humans.  Because biological processes differ in states of health and disease, it is also important to develop a fundamental understanding of pathophysiology, and common disease states such as cancer, cardiovascular disease, neurodegenerative disease, and infectious disease, to name only some of the most common. 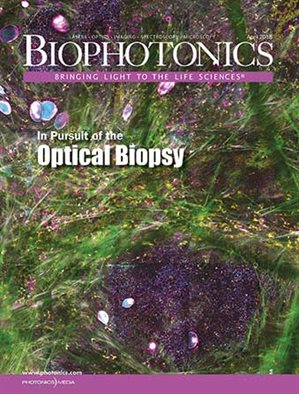 With a comprehensive interdisciplinary background, the study of Biophotonics can be divided into two remaining areas of knowledge, in either diagnostic biophotonics or therapeutic biophotonics. Diagnostic biophotonics involves developing new technologies and methods for detecting biological states of health and disease, diagnosing those states, and monitoring for changes in these states.  One primary goal in diagnostic biophotonics is to detect disease at its earliest stage, when it is most easily treated and cured. The use of light and optics affords many advantages because of the multi-dimensional data that can be collected and analyzed, frequently imaging or sensing at the scale of cells and molecules.

Therapeutic biophotonics involves the application of light for treating disease or altering biological processes.  Typically this involves the use of higher energies of optical radiation that when deposited into tissue, will change the chemical or mechanical properties of cells and tissues, frequently resulting in the desired outcome of cell death, such as in the ablative treatment of a tumor.  However, light can also be used to photochemically change cellular and molecular functions, as well as either photothermally or photomechanically remove or cut tissues.

Collectively, the field of Biophotonics is broad, and highly interdisciplinary.  The impact that biophotonics has made in discovering new biology or diagnosing and treating human disease has been profound. The future of Biophotonics looks very bright, and thousands of researchers and research labs around the world continue to advance, innovative, and create new technology as well as discover new science. Our Biophotonics Imaging Laboratory in the Beckman Institute for Advanced Science and Technology on the campus of the University of Illinois at Urbana-Champaign is dedicated to developing and translating new Biophotonics technology to improve human health as well as to discover fundamentally new principles in the biological and medical sciences.