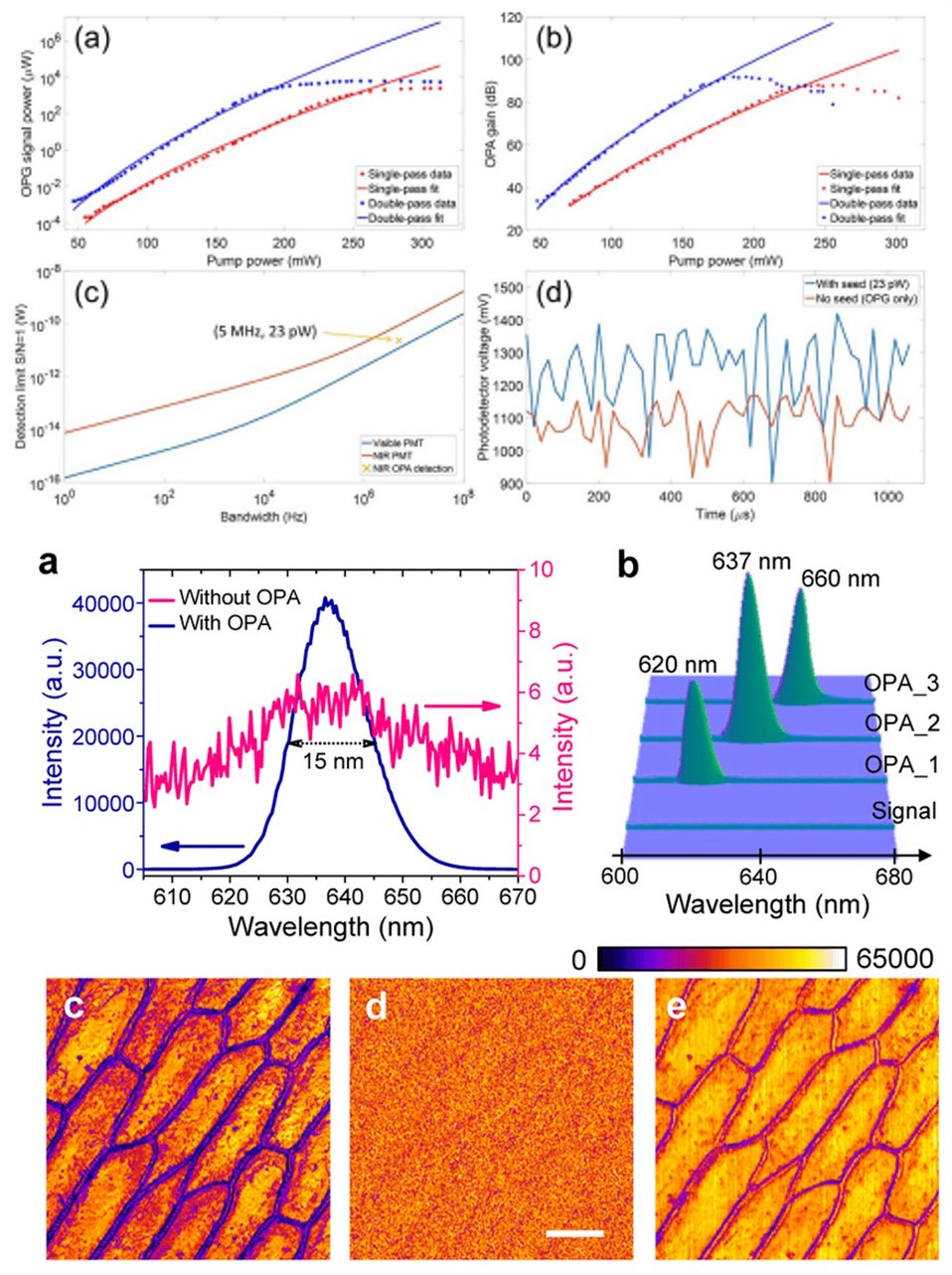 Similar to the OPA-based detection, multiple optical imaging detection methods have been developed to distinguish weak imaging signal from a strong background, such as lock-in amplification and heterodyne (interferometric) detection. These methods were widely applied in coherent Raman scattering (CRS) microscopy and optical coherent tomography (OCT). Nevertheless, they have a reduced sensitivity compared to conventional PMT-based image acquisition, resulting in deterioration of image qualities.  Compared to these optical detection methods, the OPA-based detection offers a high gain ratio and a low noise figure (NF) that overcomes the abovementioned issues and provides similar or even higher sensitivity compared to PMT-based imaging.

In label-free optical imaging, near-infrared (NIR) excitation wavelength is preferred due to the deep penetration depth and low phototoxicity. However, PMTs have a low response in the NIR range, where OPA has demonstrated its distinct advantage. In our recent experiments, by using a periodically poled lithium niobate (PPLN) crystal as the OPA medium, the optical signal at 1465 nm was amplified with a gain of 92 dB (Fig. 2 A), much higher than the typical values of a commercial PMT (~ 60 dB). In addition, OPA has an excellent noise figure (NF) down to the quantum limit. Because of the high gain and low NF, OPA allowed us to detect a 23 pW optical signal at 1465 nm under a 5 MHz bandwidth (Fig. 2 B, C). This detection limit is much lower than a commercial NIR PMT (R5509-73, Hamamatsu PMT K.K.).

The OPA-based detection method was applied on reflectance confocal imaging to amplify and detect near-infrared (NIR) optical imaging signals. A periodically poled lithium niobate crystal serves as an optical parametric amplifier, which offers high gain even with low pump power. A weak reflectance imaging signal at 1465 nm is amplified by the OPA with a high gain of up to 92 dB, and the amplified optical signal is detected with a low-cost photodetector under ambient light conditions, demonstrating a low detection limit. The performance of the OPA-based detection surpasses the typical values of a NIR photomultiplier tube (PMT). By exploiting the advantages of the OPA, the incident power needed for microscopy or imaging is reduced by 40–60 dB. The high imaging gain of the OPA also significantly enhances the imaging penetration depth by selectively detecting the weak signal reflected from deep tissue structures.