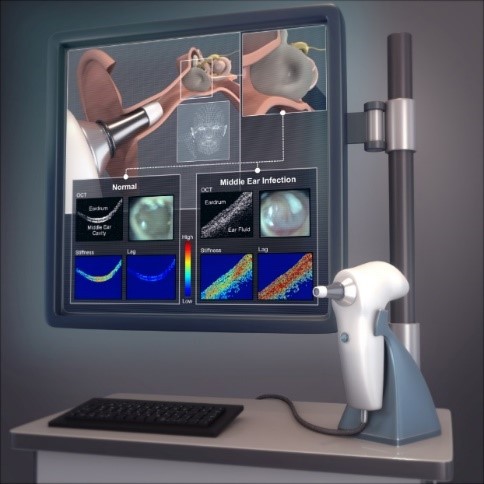 Otitis media (or middle ear infection) is any inflammation causing the accumulation of fluid in a normally air-filled middle ear space. Otitis media is an especially common health condition for children and is a leading cause of a physicians visit and antibiotic prescription during childhood. One key diagnostic factor is to determine the presence of a fluid in the middle ear, which is difficult to visually determine using a standard otoscope.

Several systems were developed to better quantify the many presentations of middle ear infection in both children and adult subjects. Acute OM cases are often seen with serous fluid and an inflamed eardrum, whereas in chronic OM cases, the eardrum thickness seems to have returned to normal, but the fluid remains and is often more purulent. A non 2D-scanning but fast-imaging-rate system was later developed to explore the pneumatic deflection of the ear under these same infectious conditions, as the eardrum becomes stiff during infection. Later, it was discovered that middle ear biofilms were a major contributor to chronic ear infections, shown by comparing OCT image to direct sampling of structures adhered to the TM. Biofilm based infections must be treated significantly different than acute ones, and may explain why tympanostomy tubes are so effective at reducing infectious symptoms vs antibiotics in chronic cases.

We have made significant advancements in both hardware and software to help analyze or collect data. A method was devised to create a 3-D map of TM thickness using positioning information gleaned from the CCD images. A sub 10,000$ version of this system was made into a briefcase with off-the-shelf parts, to both reduce the weight, size, and cost of the many components but also retain its functionality. Finally, an AI platform was developed with this system in mind that analyzes the content of imaging data to automatically identify signs of infection in OCT data.

Our portable OCT systems can detect the presence of fluid and biofilms behind the middle ear (structures and fluid), though it cannot discern what kind of bacteria or virus are present. A technique called Raman spectroscopy is one solution that can provide “fingerprint identification” of these pathogens. We are developing a combined Raman-OCT system to detect both middle ear fluid and biofilms as well as determine what type of pathogen caused the infection. This is crucial for physicians to know, as viral infections do not resolve with antibiotics. This will help physicians treat ear infections better and prevent the overuse of antibiotics.

Using our extensive library of imaging data and years of experience in ear diagnostic imaging, a machine-learning platform was developed that can automatically detect the signs of infection in the middle ear. When an OCT image of the ear is taken using one of our portable systems, the software takes approximately 20 seconds to automatically evaluate the data and identify middle ear fluid or biofilms behind the eardrum, or, if the ear appears normal. With further development, this platform can enable any user to have the diagnostic ability of an expert physician. Armed with precise knowledge of the infection in this patient, physicians can prescribe the ideal treatment for each patient. 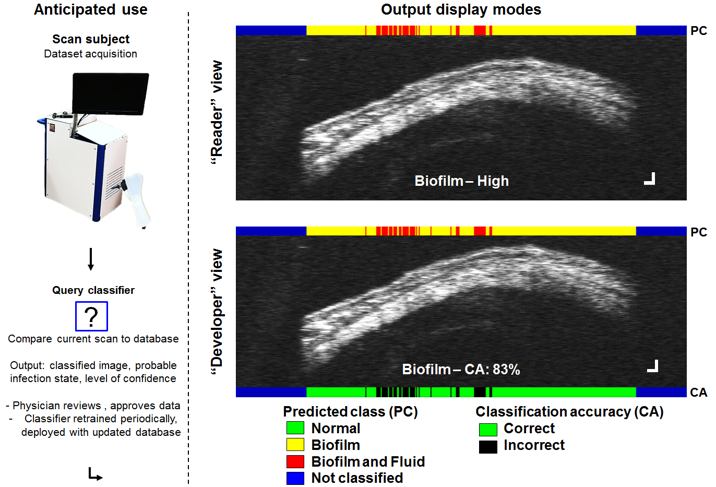 Nearly everyone has directly experienced or knows someone that has had repeated issues with ear infections. Otitis media, the general clinical name for ear infections, are one of the most common reasons for kids to visit the doctor’s office. Our group has developed an imaging system and handheld imaging probe, based on optical coherence tomography, to visualize the contents of the middle ear noninvasively using infrared light no stronger than sunlight. This imaging system can detect the contents of the middle ear without relying on visualization of the eardrum surface, which is often blocked by earwax or a difficult-to-navigate ear canal. This helps physicians more accurately diagnose and ultimately treat ear infections. 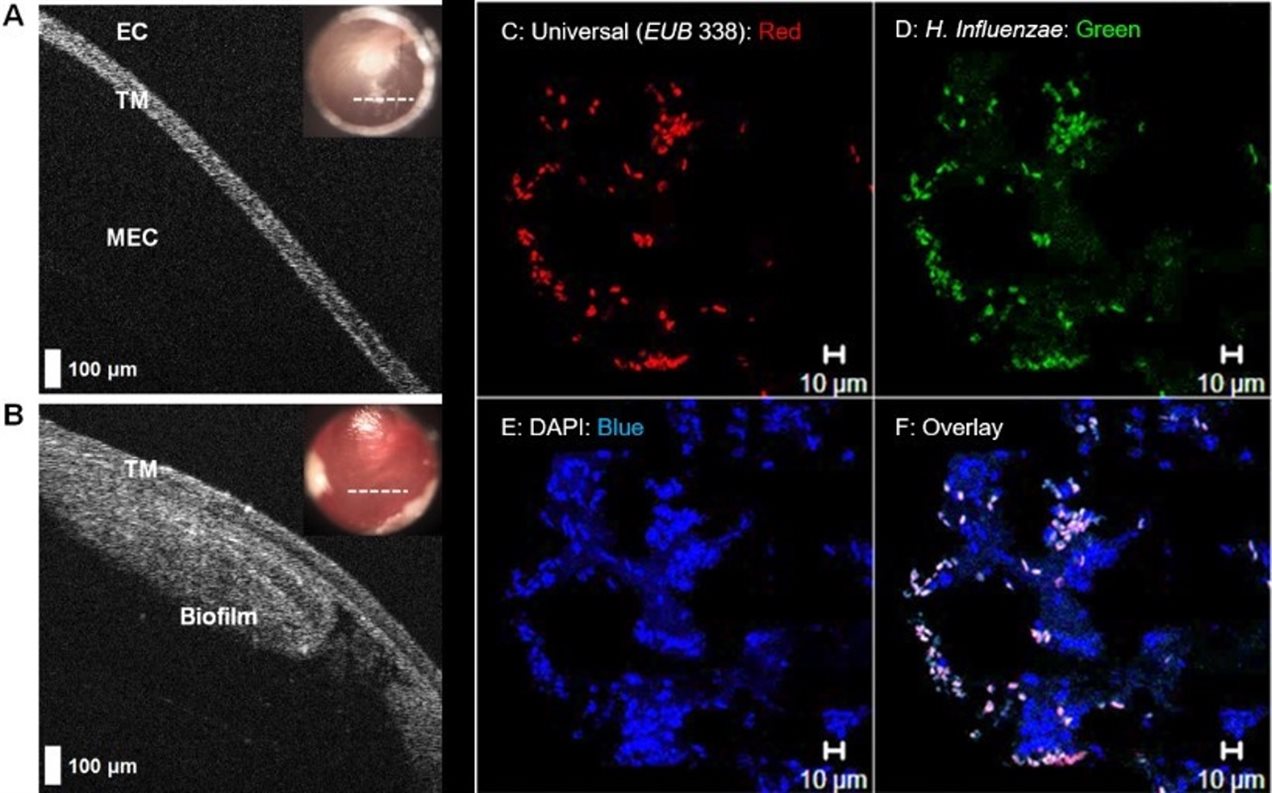 OCT image of (A) a normal ear and (B) an ear with recurrent acute otitis media. A microbial infection-related structure is found to adhere to the eardrum and within the middle ear cavity in (B). Digital otoscopy images are inset in each panel. White dashed lines indicate the physical location on the eardrum where OCT scan was taken. Representative confocal laser scanning microscope (CLSM) images of fluorescence in situ hybridization (FISH)-tagged sample from the subject with recurrent otitis media. (C) Components identified with the universal bacteria probe, (D) H. influenzae, one of the primary bacteria strains in otitis media, (E) nuclei stain, and (F) overlay of the channels reveals the presence of bacteria dispersed throughout the sample.