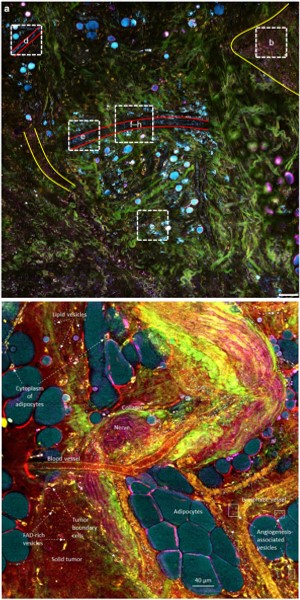 The discovery of nonlinear optical dynamics has grown tremendously since the advent of the laser and has become increasingly leveraged for spectroscopy and microscopy. Phenomena such as multi-harmonic generation, multiphoton absorption, and nonlinear spectroscopic tools such as coherent anti-stokes Raman scattering (CARS) have been identified as contrast mechanisms to identify biomarkers such as collagen, cellular interfaces, NADH, FAD, vibrational bonds in proteins, flavoproteins, and numerous other molecules. The result has been an expanded palette of biomarkers to help researchers and medical professionals identify critical biomarkers, metabolites, and morphologic/dynamic features in biological specimens to understand the cellular microenvironment and its reaction to external stimuli. Furthermore, these same features can be used by clinicians for the prognosis of the disease, assisted surgical intervention, and to provide supplementary information to histopathology.

These applications have led to numerous developments in nonlinear microscopy by the Biophotonics Imaging Laboratory. Initial developments in supercontinuum technology in the group provided a palette of optical tools for which diverse types of molecules can be excited, and imaged. Initially inspired by its utility in pathology, these sources were first developed to image collagen, cellular boundaries, NADH, and FAD with SHG, THG, 2PF, and 3PF, respectively. This has translated to the realization of real-time label-free imaging of each of these modalities, for rapid, dynamic information about the metabolic processes absent in typical histopathology. These same tools are currently being used in the lab to capture fluorescence lifetime images (FLIM) of the autofluorescence molecules, perturb and analyze the functional activity in neurons and the eye, real-time biopsies of cancerous tissue, and to study extracellular vesicles to gain more prognostic information from cancer patients. We continue to push the boundaries of nonlinear optics to study fundamental biology with numerous applications to healthcare as well.

Simultaneous Label-free Autofluorescence Multiharmonic (SLAM) microscopy is an imaging technique invented in here in the Biophotonics Imaging Laboratory that characterizes biological samples based on their inherent (or "endogenous") properties. Our SLAM systems have four channels that are collected simultaneously - each one collecting signal from a different nonlinear optical imaging modality that corresponds to unique biological features. Read more...

Fluorescence lifetime imaging microscopy (FLIM) is an imaging technique that characterizes fluorophores based on the average time between excitation and emission and provides useful information about the state of fluorophores. Our fast and label-free approach targets NADH and NADPH, two endogenous autofluorescent molecules that are abundant in cells, together termed NAD(P)H. Read more...

In addition to imaging, the Biophotonics Imaging Laboratory has made optical developments to facilitate activation of neural tissue using optogenetics. Ultrafast lasers have been used to activate neural excitation using optogenetic probes, but modulation of the spectral phase to more finely drive this process has not been leveraged in the field.Read more...