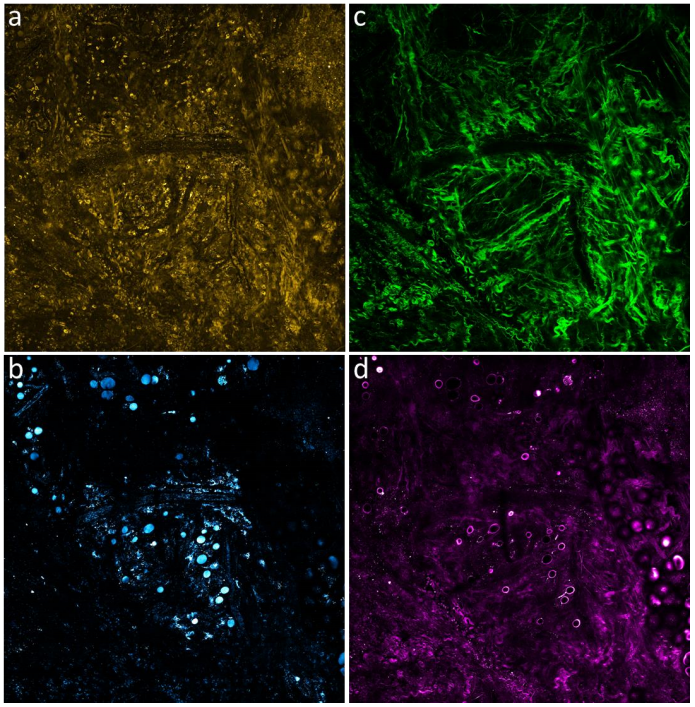 Simultaneous Label-free Autofluorescence Multiharmonic (SLAM) microscopy is an imaging technique invented in here in the Biophotonics Imaging Laboratory that characterizes biological samples based on their inherent (or "endogenous") properties. Our SLAM systems have four channels that are collected simultaneously - each one collecting signal from a different nonlinear optical imaging modality that corresponds to unique biological features. We are able to achieve simultaneous excitation from the same laser source for all four modalities using a photonic crystal fiber (PCF) to generate a supercontinuum and then using a programmed pulse shaper to select the optimal excitation window. Autofluorescence from two key metabolic cofactors: FAD and NAD(P)H is collected with two- and three- photon excitation, respectively.  This autofluorescence provides valuable information on the metabolic state of the sample. We also collect second harmonic generation (SHG), which stems from collagen, a common component in the extracellular matrix. The final channel is third harmonic generation (THG), which provides contrast based on optical heterogeneity and boundaries within samples. Each channel has its own photomultiplier tube (PMT) and the signal at each PMT is controlled with various dichroic mirrors (DM).

Simultaneous label-free autofluorescence-multiharmonic (SLAM) microscopy is a powerful tool that elucidates pathways in biological processes, which gives major advantages to intravital imaging as no extrinsic agents are involved.  SLAM is a single-excitation source nonlinear imaging platform using a custom-designed excitation window at 1110 nm and shaped ultrafast pulses at 10 MHz to enable fast, simultaneous, and efficient acquisition of autofluorescence (FAD and NADH) and second/third-harmonic generation from a wide range of cellular and extracellular components (e.g., tumor cells, immune cells, vesicles, and vessels) in living tissues. In addition, in vivo tracking of cellular events can also be allowed.

One of the fascinating applications of SLAM is that it can be used for cancer prognosis. SLAM can see the morphological and metastatic alternations in tumor microenvironment during the chemotherapy. In vivo study with PDX mice showed that SLAM can find the effective chemotherapy regimen leading to personalized therapy. 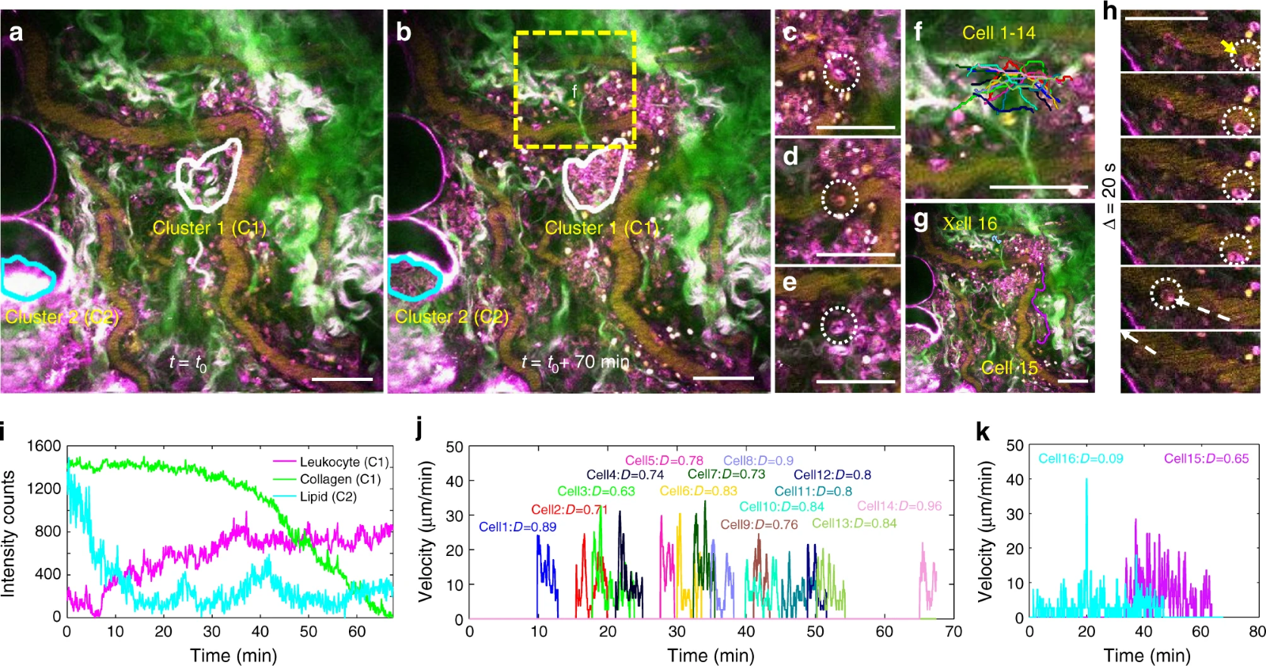 Leukocyte-swarming visualized and characterized by SLAM microscopy. Images acquired at (a) the beginning and (b) the end of the swarming. Collagen rearrangement was marked by the white boundary (Cluster 1, C1) while lipid interaction was marked by cyan boundary (Cluster 2, C2). (c)–(e) Zoomed-in images of multi-nucleated neutrophils. (f) Traces of Cells 1–14, which were tracked to travel via similar routes to the same cluster at different time points, as shown in the velocity map (j). (g) Traces of Cells 15–16, which were both tracked for > 30 min and exhibited different behavior, with Cell 15 migrating towards the cluster with high speed and high directionality throughout the entire time course and Cell 11 mostly making random walk, as shown in the corresponding velocity map (k). (h) Leukocytes leaving the site (Cells 17–18 in Video). The series of snapshots were taken every 2 s and shown for every 20 s. The first three snapshots showed the deformation of the leukocyte, changing from a round shape to a stretched cell elongated along the direction of travel, which typically precedes the acceleration process shown in the last three snapshots. (i) Quantification of collagen clearance, cell accumulation, and lipid deformation within the marked clusters in a and b (C1 and C2). (j), (k) Velocity and directionality map of Cells 1–16. The color of the curves matches the color of the traces in (f) and (g) and the Video. D directionality. Scale bar: 50 µm

SLAM image of an in vivo tissue after drug treatment. (a) Representative image of tumor tissue in channel of (a) 2PF, (b) 3PF, (c) SHG, (d) THG, (e) merged. Different aspects of THG/3PAF compared between (f) chemotherapy treated and (g) control mice.

EVs were imaged with SLAM with the need of capturing EVs label-free and revealing various metabolic information at the same time. SLAM is capable of imaging isolated EVs derived from cell culture media, urine, serum, and other biofluids. Moreover, SLAM can image EVs inside biological tissues in vivo and ex vivo. SLAM uses 3 optical channels for the EV analysis: THG, 2PF and 3PF. Optical redox ratio FAD/(FAD+NADH) is used for differentiating subpopulations of EVs through metabolic and structural differences. Subpopulation of EVs enable the diagnosis and progression of cancer. NAD(P)H-rich EV ratio is one of the markers for diagnosing and staging cancer of parent cells. Vesicle dynamics in cells are known to be cooperating in carcinogenesis and SLAM can visualize this step. Dynamics of EVs (release, uptake, and migration of EVs) were found in cell and tissue level imaging with SLAM. 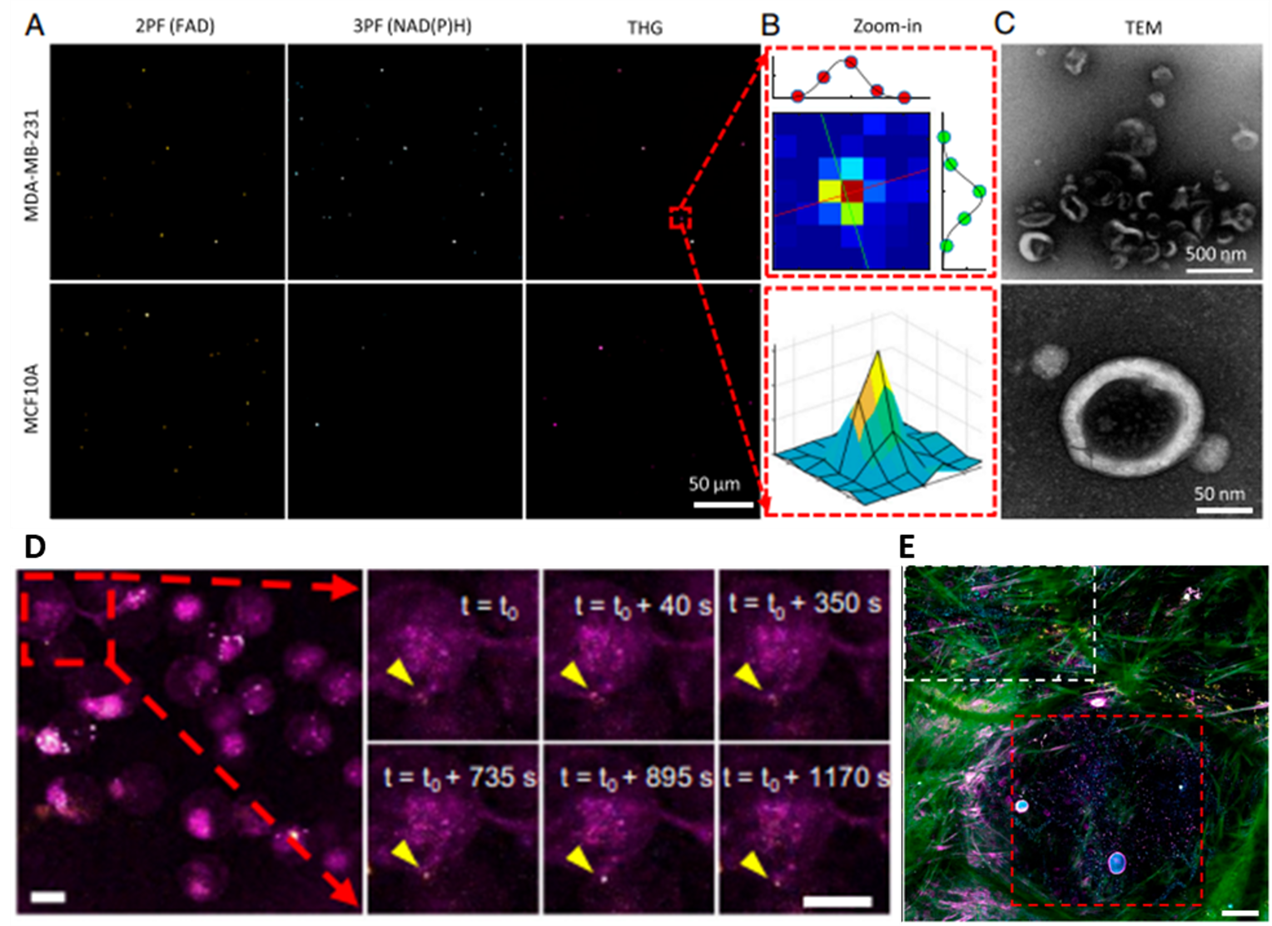 EV imaging with SLAM (a) SLAM images of EVs isolated from cell cultured media. (b) Zoomed-in image of 1 representative EV with 2D (upper) and 3D (lower) visualization maps. Each pixel size is 500 nm. (c) TEM image of EVs. (d) Release of EV from a cell. (e) In vivo visualization of EVs in tumor-bearing rat.

The majority of the current intraoperative optical imaging techniques involve labeling which perturbs the tissue microenvironment and alters the optical signatures of various biochemical processes. In contrast, multiple nonlinear optical imaging (NLOI) modalities have been demonstrated to have the ability to visualize microstructures and provide molecular and functional information. With the development and demonstration of our lab-based simultaneous label-free autofluorescence and multi-harmonics (SLAM) microscope,  continuous efforts have been made to adapt this multimodal NLOI platform to a portable system for intraoperative cancer imaging. Previously we have demonstrated one version of our intraoperative label-free NLOI system in human breast cancer surgeries. Correlations with the histology results have shown that this intraoperative NLOI platform has the potential to provide diagnostic information at point-of-procedure without destroying the biological tissue integrity. With our recent upgrades on the imaging system, we were able to provide optical assessment of needle biopsies taken from live animal patients during veterinary surgeries. We are working towards further improvement of the intraoperative label-free NLOI system to enable real-time screening of needle biopsies and surgical specimens for cancer diagnosis at point-of-procedure. 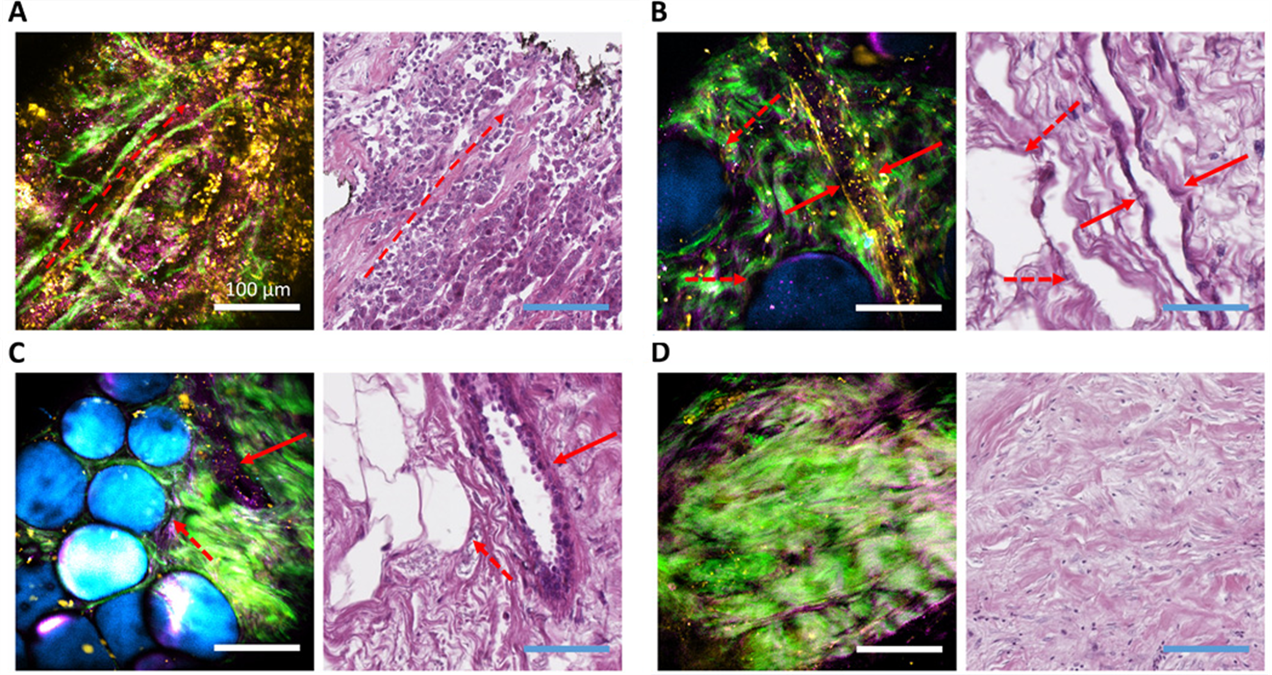 Histopathology has been widely adopted in tissue assessment in clinical decision making and in research. However, its complex procedure of tissue preparation and analysis prevent histopathology from intraoperative assessment and cause delays in treatment planning. Our lab developed an Artificial Intelligence (AI)-driven real-time intraoperative diagnosis system based on stain-free slide-free multimodal multiphoton microscopy. This system captures rich molecular and structural information from living or freshly excised tissue and use Deep Neural Networks (DNN) to extract meaningful features and generate diagnoses. Compared to traditional histopathology, which may take several days to process the tissue and generate analysis reports, our highly automated system only requires minimal tissue processing and generates reliable diagnosis within minutes, which makes this technique an attractive alternative or adjunct to histochemistry in clinical settings, especially in time-sensitive scenarios such as the intraoperative assessment of breast tissue during surgical oncology procedures. 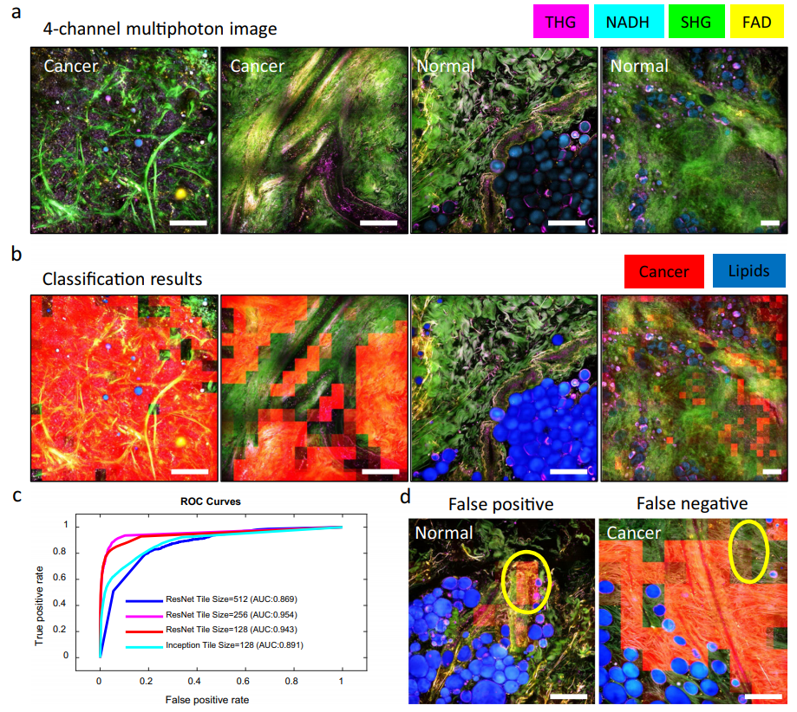 Histology imaging, invented centuries ago, serves an essential clinical imaging method to provide evidence for cancer-related diagnosis. However, the time- and labor- intense tissue preparation processes of histology causes delay in cancer diagnosis and increases the cost of cancer treatment. Our lab uses a novel imaging method, the simultaneous label-free autofluorescence multiharmonic (SLAM) microscopy, to generate histology-like images from label-free tissues, saving the time and labor of tissue processing. By imaging fresh human and rat tissues without any tissue processing or staining, various biological tissue features are effectively visualized by one or multiple imaging modalities of the SLAM microscope and converted to histology-like contrasts. In particular, we realized for the first time the real-time 3D histology-like imaging. 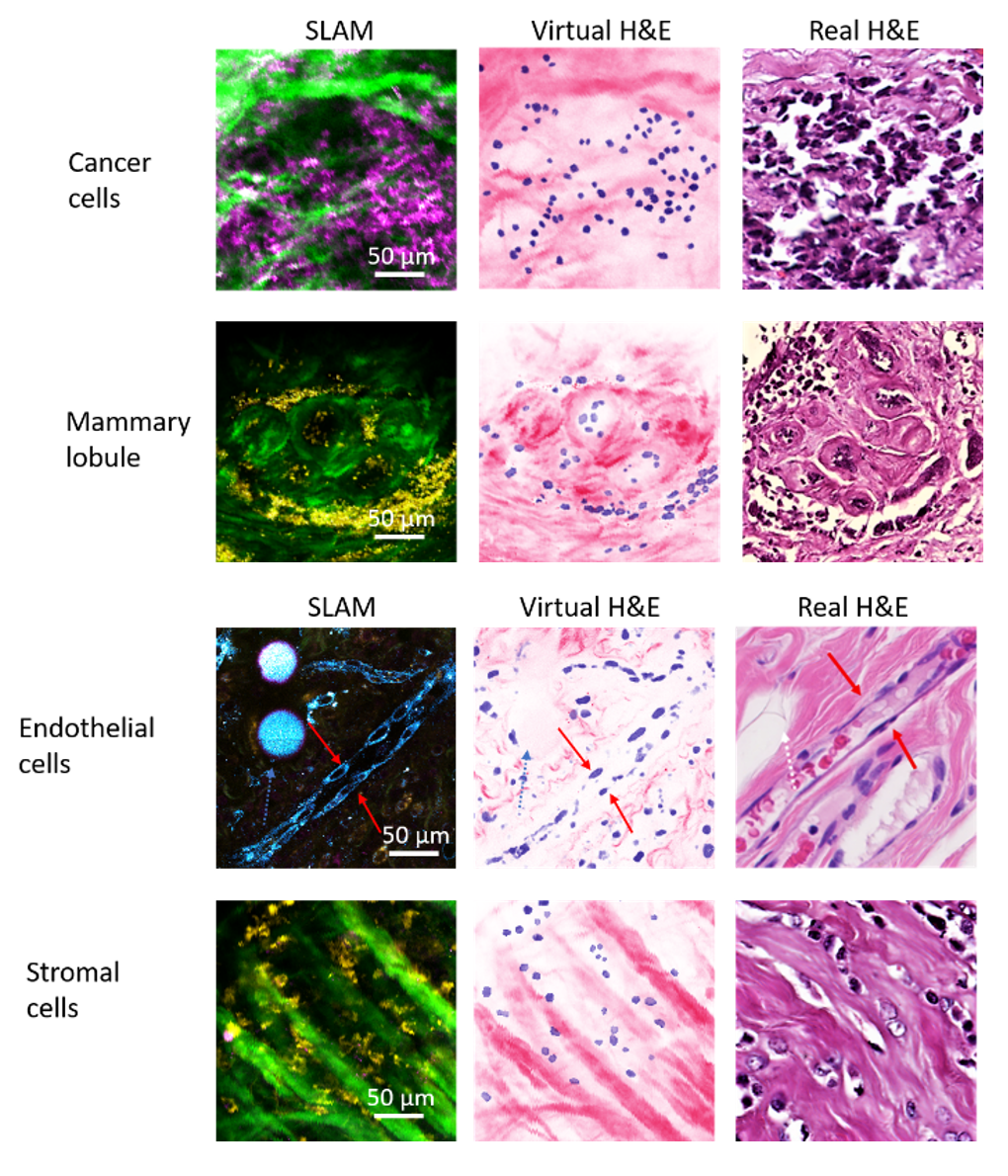 Live cell imaging using SLAM microscope has been demonstrated in two different applications: cell identification or differentiation, and metabolic profiling calibration. While  third harmonic generation (THG, magenta) highlights the cell membranes and multiphoton autofluorescence (2PAF, 3PAF) can reveal the biochemical information in the cells, the combination of the three modalities can provide an informative optical signature, which can be beneficial in tissue imaging for identifying different types of normal cells, immune cells and tumor cells. Quantitative optical redox analyses of live-cell images have been mainly used to calibrate the metabolic profiling for tissue microenvironment and the extracellular vesicles. 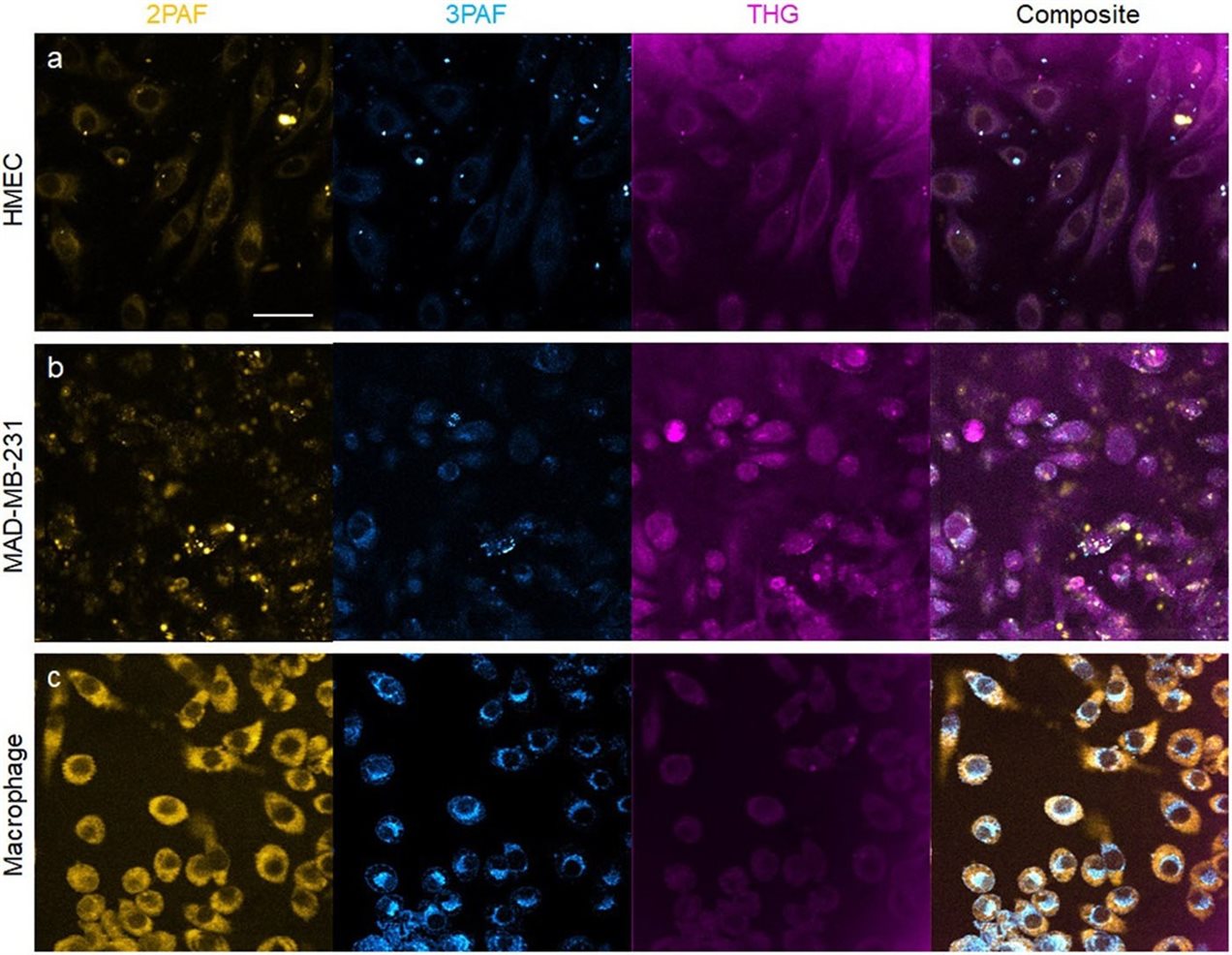